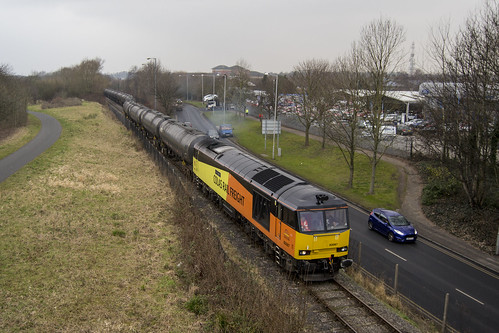 At the end of 2013 DB Schenker had overhauled 21 locos, realising their heaviest trains were beyond the haulage capabilities of a Class 66 on certain routes and using 40% less fuel, a good business case for overhaul could be made. 21 locos have been through the works at Toton and the drivers say they are better now then ever, far superior to a Class 66 by far. It seems another 9 locos may be selected for phase 2 of the overhaul program.
At the time of writing the following have been through the works: 60001, 7, 10, 15, 17, 19, 20, 24, 39, 40, 44, 54, 59, 62, 63, 66, 74, 79, 91, 92 and 100. The last loco to be overhauled was 60066 and emerged in a silver Biomass branding for a new traffic flow supplying Biomass to Drax power station. All have appeared on the bitumen trains apart from 60066, which sustained damage to a cab roof, in early 2014, after coming into conflict with the structure at the Liverpool bulk handling terminal and has only emerged back into service, during February this year, after being repaired at Brush works Loughborough where the class were assembled.
Early in 2014 after much speculation, a deal was struck to sell and refurbish 10 locos to Colas for their increasing freight traffic wins, with an option to buy another 10 locos after the first 10 have been completed.
To date in late January 2015 the following locos have been overhauled: 60002, 21, 76, 85 and 87. The last un-refurbished loco to visit the railway fell to 60035 on December 11th and the final DB Schenker train was brought in on 17th December 2014 by 60091.
It was announced that starting in January 2015 Colas Rail Freight had successfully bid for Total’s contract to deliver the bitumen train from Lynsey to Preston on a 5 year contract using recently purchased and overhauled Class 60 locomotives.

Colas Super Class 60’s:
After much speculation about DB Shenker putting up stored Class 60 locomotives for sale. A deal was announced in early 2014 to sell and overhaul 10 Class 60’s for Colas Rail Freight to the same standard as the 21 locos DB Shenker had refurbished as part of it’s ‘Super 60’ Project. An option to purchase a further 10 locos may be taken after the first 10 locos have been completed and more traffic wins made to employ the Class 60’s.
The locomotives were ordered in May 1988 at the cost of £120m for the 100 locos. The super structures where assembled at Procor works in Wakefield taking five weeks to assemble and pre-paint before road shipment to Brush Traction at Loughborough where final assembly took place. The engine chosen to power the locos was a fuel efficient Mirrlees Blackstone eight cylinder 145 litre 8MB275RT set to deliver 3100hp, this was a state-of-the-art inline eight cylinder engine from the same stud as the six cylinder units then operating in four refurbished class 37/9 locomotives 37901-37904. The first completed loco emerged in June 1989 but teething problems delayed many of the earlier build locos into traffic by several months and the final loco was completed in November 1992.
As the locos clocked up the hours they gradually started to be stored by EWS as the deliveries of Class 66’s was completed and during the summer months demand for Class 60’s was low however with the start of the leaf fall season the locos were brought back out of storage to cover Class 66’s being used on rail head cleaning duties and some 70 class 66s exported to work in Europe on new traffic flows taken over by EWS and then later DB Shenker.
In 2007 tests where carried out to evaluate fuel costs of class 60 verses class 66 locos and on a certain route on the same load a class 60 was found to average 6 litres of fuel a mile compared to 10 litres burnt by a class 66. So a program of overhaul was considered as many locos had clocked over 10,000 hrs and never received a general overhaul since being built. How ever a down turn in the economy put the this program on ice.
EWS found to their cost on the bitumen train on Copy Pit that on a bad rail day a class 66 was pushed to haul 12 or 13 of the old 1960’s rail tankers, and stalling or late running could only be avoided by rostering a class 60 on the job.
So the ‘Super 60’ program was announced in 2011 to overhaul a core number of locos required to handle DB Shenker’s heaviest trains and giving the locos another 15 years front line service. To date 21 locos have been refurbished and a second batch of 5 locos may be started after the present locos being overhauled for Colas have been completed by DB Shenker at Toton. 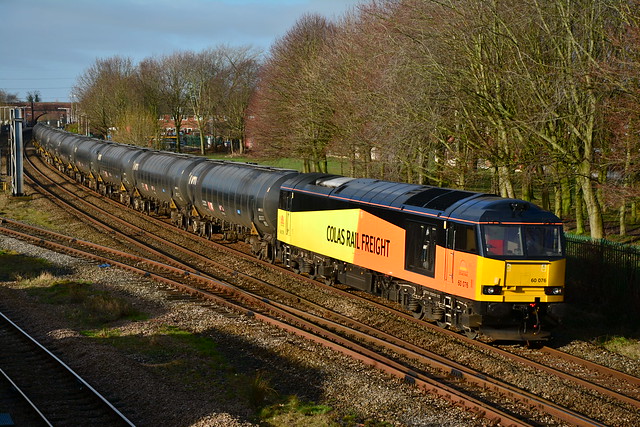